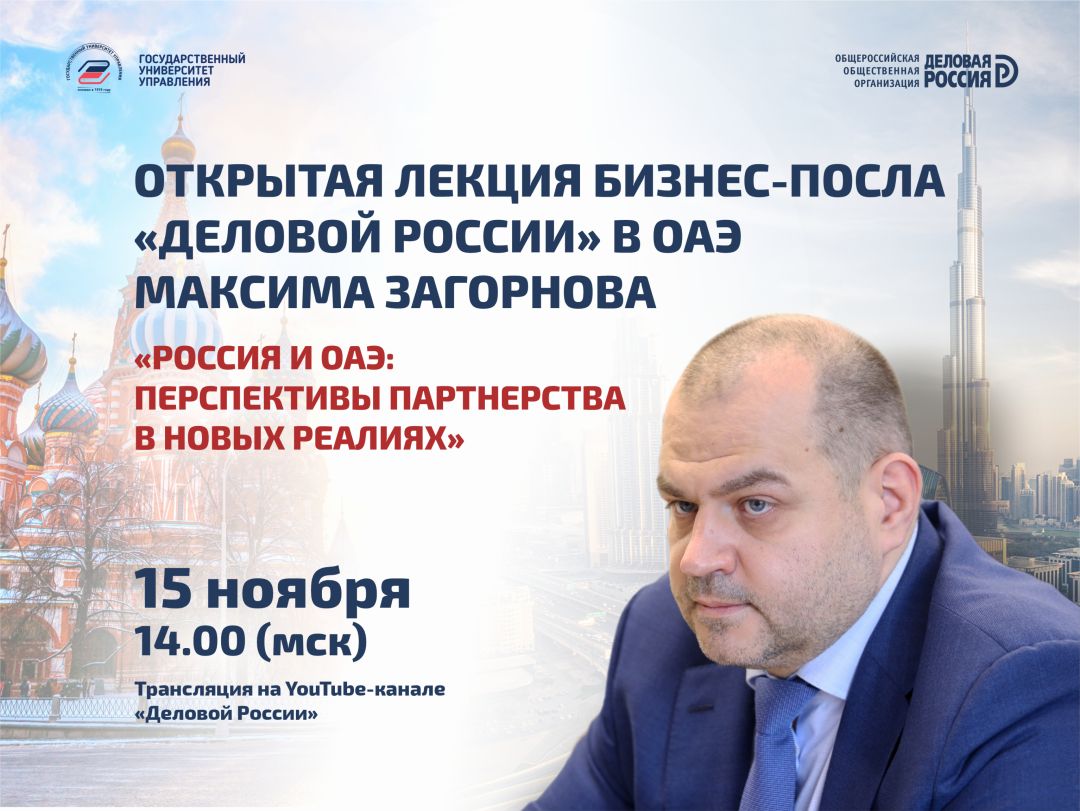 Maksim Zagornov to give a lecture to students and young entrepreneurs

On November 15, at 14.00 (Moscow time), Business Ambassador of Business Russia to the UAE, CEO of MKC Group of Companies Maksim Zagornov will give a talk to students and young entrepreneurs within the framework of the Open Business project. The project is carried out by the All-Russia Public Organization Business Russia with the support of the Ministry of Science and Higher Education of the Russian Federation.

The topic of the lecture is “Russia and the United Arab Emirates: prospects for partnership in new realities".

Maksim Zagornov has been in business for more than 25 years, 17 of which he has been successfully heading MKC Group of Companies, an engineering enterprise whose core activity is the turnkey construction of energy facilities. The company designs, builds and operates gas genset power plants (mini-thermal power plants).  It is one of the industry leaders in the Russian Federation.

Maksim Zagornov was standing at the origins of the formation of the distributed power generation industry in Russia. Largely thanks to the initiatives of Maksim Zagornov, regulations for the industry have been developed and implemented, interaction with monopolies and supervisory authorities has been established.

In order to develop the distributed generation market in a balanced manner, in 2005 Maksim Zagornov created a non–profit association - Distributed Power Generation Association. Today, the Association unites the potential of the country's leading enterprises and organizations and implements a number of joint projects. In 2013, Maksim Zagornov established a Distributed Power Generation - Great Achievements International Award, an industry award for the best projects in the field of distributed and alternative energy. Over 10 years, more than 700 companies from 12 countries have participated in the competition.

Maksim Zagornov also actively works in the framework of public business associations. He is a Member of the General Council of the All-Russia Public Organization Business Russia, Chairman of the subcommittee on Distributed Power Generation of the Business Russia Energy Committee.  In January 2018, he was appointed as the organization's Business Ambassador to the United Arab Emirates.

As the Business Ambassador, Maksim Zagornov has contributed to strengthening business relations with the United Arab Emirates. He has initiated the signing of cooperation agreements with the Chambers of Commerce and Industry of Abu Dhabi and Sharjah. He has built effective cooperation with the UAE Embassy in Russia. He has become a permanent member of the Russian-Emirati Intergovernmental Commission. Over 5 years, Maksim Zagornov has organized five large-scale business missions to the UAE: to such international exhibitions as WETEX, ADIPEC, EXPO 2020.

In February 2022, on the initiative of Maksim Zagornov, the Business Russia Trade House was established in the UAE – a body that assists in implementing export projects of the business association companies, helps in the relocation of Russian enterprises to the UAE.

Following the results of the work, he was awarded a Letter of Gratitude from the Chairman of Business Russia Alexey Repik for his contribution to the development of cooperation with the countries of the Persian Gulf. The awards received by Maksim Zagornov also include the following: winner in the Strategy of the Year nomination of the Results of the Year of the Urals and Siberia Award (2014), winner in the Businessman of the Year nomination of the Man of the Year award (2015), winner of the International Award named after S. Witte for the outstanding contribution to the development of the national market of distributed power generation and energy-efficient construction (2020). In 2021 and 2019, he received a gratitude from the Minister of Energy of the Russian Federation for his contribution to the development of the Russian fuel and energy complex.