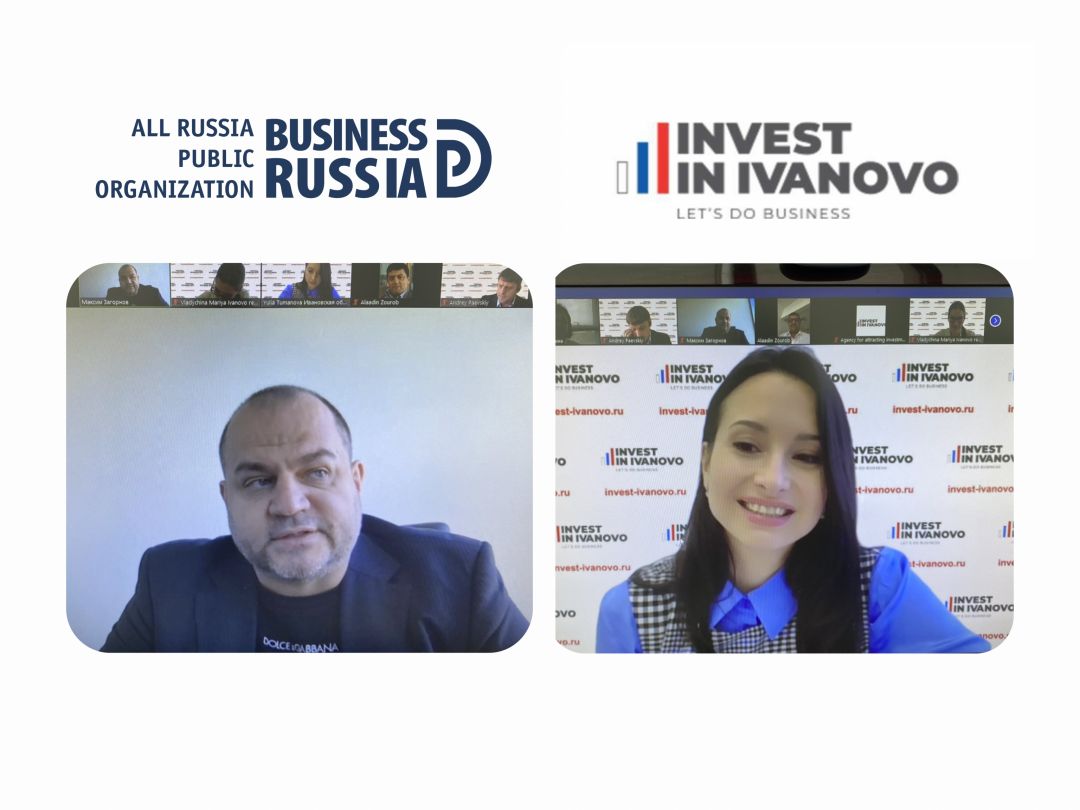 On April 14, Maksim Zagornov, Business Ambassador of Business Russia in the UAE, held talks with Yulia Tumanova, Director General of the Agency for aattracting investments in the Ivanovo Region. The meeting was held in a videoconference format.

During the meeting, Russian-Emirati cooperation issues were raised, including provision of various industries of the Ivanovo region with raw materials, increasing the volume of mutual supplies and the possibility of organizing import-substituting productions.

Yulia Tumanova, Director General of the Agency for attracting investments in the Ivanovo Region, voiced the requests of regional companies for positions that are in demand in the face of external sanctions. Among the main requests: alternative supplies of raw materials, components and equipment.

"We are continuously working to create favorable conditions for business development in the Ivanovo region. We not only assist companies with the implementation of investment projects, but also examine issues that enterprises currently have to face, conduct a survey questionnaire of companies. Feedback allowed us to identify free niches in import substitution at this stage," Yulia Tumanova noted

"Business Russia Trade House in the UAE has already received more than 70 appeals from Russian entrepreneurs. Most of the appeals were related to the provision of operational assistance: implementation of emergency payment transactions through Emirati banks, organization of export supplies of consumables and raw materials through the Emirates, organization of alternative logistics of export cargo from Europe to Russia through the UAE. Some of the appeals were also of a strategic nature: many requests were received for assistance in opening a company in the UAE, as well as in locating a large-scale production facility on the territory of the Trade house," Maksim Zagornov noted.

Business Ambassador of Business Russia in the UAE also emphasized that, taking into account the current political and economic conditions, the United Arab Emirates market is assessed as the most promising for the implementation of export projects of Russian companies. The trade turnover between the Russian Federation and the UAE has increased 10-fold over the past 10 years and today amounts to more than $ 5 billion. The UAE has a consistently friendly position towards Russia and offers the most comfortable conditions for the development of Russian business in the Emirates.

During the talks, the parties also discussed cooperation development in key sectors of the region's economy, financing and building logistics chains between the Ivanovo Region and the UAE.

Today, the Ivanovo region is a modern region of the Central Federal District with a developed economy, located in close proximity to Moscow (249 km).

More than 31 million people live within a radius of 500 km from the Ivanovo region.

Historically, the Ivanovo region is the center of the Russian textile industry. The basis of the economic potential of the Ivanovo region, as before, are enterprises for the production of textiles and clothing, their share in the structure of manufacturing takes - 40.0%.

A special advantage of the region is the developing system of transport communications, which includes the intersection of the most important railways and highways, river ports of the Volga basin, providing access to the Caspian, Baltic and White Seas, and the airport.